Issues in Need of Solid Reporting

When you pick up the morning paper here in Cairo, it’s a front page of real news.  Some headlines from today’s Daily News Egypt:  ‘Random’ arrests after Israel embassy attack.”   Rights groups are claiming the same abuses by police now that were prevalent under Mubarak. 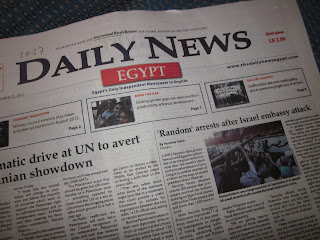 “Government official resigns in protest of gag order.”   What a great quote from a public official who WANTS to talk with the media, “If I’m forced to choose between keeping my mouth shut and quitting…then I prefer quitting.”
“Antiquities chief quits amid strike pressure.”   This is the head guy who overseas the protection of Egypt’s historical treasures.   The resigning official tells Daily News Egypt, “I refuse to be regarded as a stooge.   I felt powerless and overwhelmed especially that I had been deprived of much of my authority.”
“Teachers call for a million-man march Saturday.”  Teachers are striking, and they are angry.   But following the revolution, people are certainly freer to speak.
“Clinton:  Women must be part of new Mideast.”    Without question, we won’t have a safe world or democratic development without full freedom for women.
Typical news day in Cairo.  Wow.
###
Posted by Karl Idsvoog at 3:43 AM