An Exercise for Your Racist

Unfortunately, we can forget about the American television networks devoting any substantive time to one major problem facing the country:  racism.   But this election season does provide an opportunity to confront it.   Here's an exercise for you to do with your nearest racist.   There shouldn't be any trouble finding them.   They are in every community. 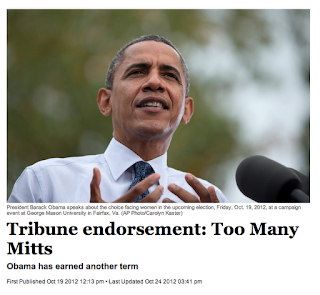 The Salt Lake Tribune uses logic, reason, and facts.   Racism, of course, doesn't allow logic or reason or facts.   Ask your racist to use logic, reason and facts when responding to each point made by the Salt Lake Tribune endorsement and watch closely.   You may actually observe cognitive dissonance.   You may actually have the opportunity to see the point where the racist shows that ever so slight movement away from racism and toward thought and reason.   More than likely, the racist simply won't listen.   The racist will simply ignore facts and logic.   Reasonable, thoughtful, rational people are not racists.  Rational reasonable fact-based thinking doesn't tolerate racism. Nobody should.

Nor should American news organizations consistently fail to address the issue.

Don't Bother Writing to Your Congressman

Students in my computer-assisted reporting class wrote to each member of the Ohio
Congressional Delegation making a simple request.   What happened?   Take a look.
Posted by Karl Idsvoog at 4:28 PM 2 comments:

What a Reporter is Supposed to Do! It is BASIC

I'm not a fan of the professional wrestling version of journalism, that would be FOX & MSNBC.  But on Hardball, Chris Matthews did what every journalist is supposed to do:  ask for the evidence.

When former GE CEO Jack Welch tweeted that the "Chicago guys" did something to the "jobs numbers," Mathews asked Jack for evidence.   He had none.

What has happened to basic critical thinking?  A prominent CEO makes that kind of assertion with absolutely no evidence.   Applying Jack's standard, I could simply say I'm surprised to learn that Jack Welch is racist, that he made those comments because he doesn't like the fact that a black man is in the White House.   Welch can't fight the numbers with facts or evidence, so he just makes something up.   Obviously, I have no proof that Jack Welch is a racist, that he is opposing Barack Obama because he can't tolerate the fact that a black man is President of the United States.   But if I apply Jack Welch's own standards for intellectual rigor, I don't need any evidence.

Do you think Jack Welch would have tolerated that level of thinking from any of his executives at GE?  So why has he adopted such a miserably low standard for his own public statements?

Journalism requires verification.   It's a shame there's so little of it and way too much of he said/she said.   Being a human microphone stand is not journalism.   Chris Matthews didn't have to ask a hard question, just a simple direct one.   "Jack, do you have any evidence?"   No.

Then why would someone of Jack Welch's position make such a statement?   Oh that's right, he's a racist.   Again, I have no proof, no facts.   For this post, I'm just applying Jack's standards, standards no news organization should ever tolerate.
###
Posted by Karl Idsvoog at 12:44 PM 2 comments: