A Simple Solution for Bill O'Reilly

The solution for Bill O'Reilly is simple.   It's the same solution Brian Williams had at his disposal.   Richard Nixon had it too, and had he used the solution chances are he may never have had to resign.

There are lots of VJ's now, the one-man-bands who do it all.   Back when Bill O'Reilly was working for CBS it was always a TV crew.    The correspondent was not by himself.

The Washington Post's Erik Wemple writes what's probably slightly disconcerting for FOX News because Erik's piece contains facts and rational thought.   Will Roger Ailes take any action at all?    Erik asked Fox News for the name of the photographer, and was told it is Roberto Moreno.   Keep watching Erik's blog for an update once he finds the cameraman.

Is O'Reilly telling the truth about his "Falklands warzone" coverage?   A CBS correspondent who was there doesn't think so.   Eric Engberg describes what it was like for CBS crews covering the Falklands War on his Facebook post this way:

"Our knowledge of the war was restricted to what we could glean from comically
deceitful daily briefings given by the Argentine military and watching government-
controlled television to try to pick up a useful clue from propaganda broadcasts. We --
meaning the American networks -- were all in the same, modern hotel and we never
saw any troops, casualties or weapons.

It was not a war zone or even close. It was an "expense account zone.'"

Would any legitimate news organization take immediate action against a host, anchor or reporter
making things up?   Of course.  Will Fox?

"O'Reilly has said he was in a situation in Argentina where "my photographer got
run down and hit his head and was bleeding from the ear on the concrete and the
army was chasing us." The only place where such an injury could have occurred
was the relatively tame riot I have described above. Neither Doyle, who would have
been immediately informed of injury to any CBS personnel, nor anyone else who was
working the story remembers a cameraman being injured that night. No one who
reported back to our hotel newsroom after the disturbance was injured; if a cameraman
had been "bleeding from the ear" he would have immediately reported that to his
superiors at the hotel. This part of O'Reilly's Argentina story is not credible without
further confirmation, and O'Reilly should identify the cameraman by name so he
can be questioned about the alleged injury."

Not being a journalistic organization, what Fox News will do is uncertain.   Most likely, it will take no action at all.   Bill O'Reilly's program makes money.   That's what Fox News cares about, not journalism, not ethics, not professional standards, not truth.

And you can watch Julian Bond's entire presentation on KSUtube.

Rather than ignoring what Julian Bond says reporters should be questioning their members of Congress about it.

Posted by Karl Idsvoog at 1:01 PM No comments:

Want the Truth? Talk to the Photographers

Brian Williams did not misremember.

Brian Williams apologized, sort of.  He didn't admit that he lied.  He did not apologize for lying. As the New York Times points out, "With an Apology, Brian Williams Digs Himself Deeper."   The question is does the main anchor of NBC Nightly News have a problem telling the truth?   Does he embellish stories?   Does he make things up?

There's one way to find that out.   Talk to the photographers.

Nobody knows the correspondent, the reporter better than the photographers.

Maybe it's something in the photographer's DNA, the men and women who take the video, who are often better reporters than the reporters whose stand ups they shoot.   If you want the truth about what's going on in any broadcast news operation, talk to the photographers.

Any media reporter trying to find the truth about Brian Williams needs to talk to the photographers.

And media reporters have a simple question for NBC.   NBC doesn't have an anchor who misremembered, it has an anchor who lied.   Is that ok?

Do a Google search for childhood deaths.   Click through the first several pages of

the 77 million results and you'll find information from the CDC and WebMD and UNICEF and a range of advocacy groups.    You'll find quite a few stories from traditional media on the Nationwide Super Bowl ad.  What's not there are stories from major media on the problem of accidental deaths.

Congratulations to Nationwide.   It brought attention to an important issue.   Will the press do anything more than do stories on the commerial?   Let's hope so. 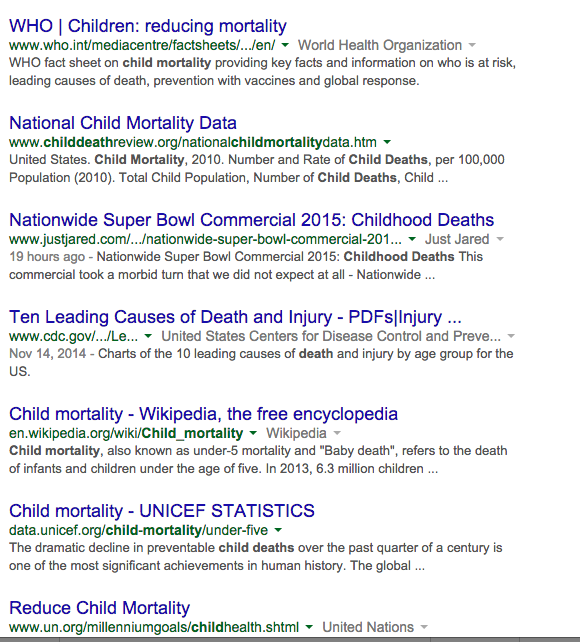 Watch a commercial that's worth watching, and one that will probably prevent some family tragedies.

Tonight is the Super Bowl.   At halftime, we'll see a spectacular halftime show.   They may not be quite as spectacular as the Super Bowl extravaganza, but the halftime shows at college games are wonderful.  The Ohio State or Wisconsin or Michigan or UCLA or USC or Alabama bands put on a great show.   It's certainly far more interesting than a set full of football yackers.

Why doesn't ESPN or the networks show the halftime show for college games?

Does ESPN think it will lose audience?   Does ESPN think guys on a set yacking about the game will attract more viewers than a halftime event where viewers might see their son or daughter performing an entertaining show that has taken days/weeks of practice?

It's halftime - time to yack, except during the Super Bowl.

Posted by Karl Idsvoog at 6:37 PM No comments: