Kent State University student journalist Richie Mulhall has done great work trying to get the details of the $100 million plus ESPN-MAC contract that requires MAC University participation for the next 13 years.   Richie has confirmed:

1.  The University of Akron does not have a copy of the contract.

2.  Bowling Green State University does not have a copy of the contract.

3.  Ohio University does not have a copy of the contract

4.  Miami University does not have a copy of the contract.

5.  Kent State University is not responding to Richie's public records request of September
10.

Congratulations to Richie Mulhall.  On September 23, Richie's commentary documenting the Ohio MAC universities not having a copy of a 13-year contract to which the MAC says each has agreed to a confidentiality clause is the second item on JimRomenesko's media blog.  So reporters all over Ohio have the information.

As far as I know, not a single Ohio news/sports organization has followed  up.   I guess it must be difficult to ask substantive questions or to write a substantive story when you're waving your pom poms to cheer the team.  When do you think Ohio sports reporters will put down their pom poms and pick up their pens?   With the Ray Rice incident, sports reporters covering the NFL are discovering they have to learn how to do accountability journalism.   If you're not doing accountability journalism, it's NOT journalism.

Wow - it's a 13 year contract between ESPN and the MAC worth more than $100 million for the universities in the Mid-American Conference, and the University of Akron says it does not have a copy of the contract. 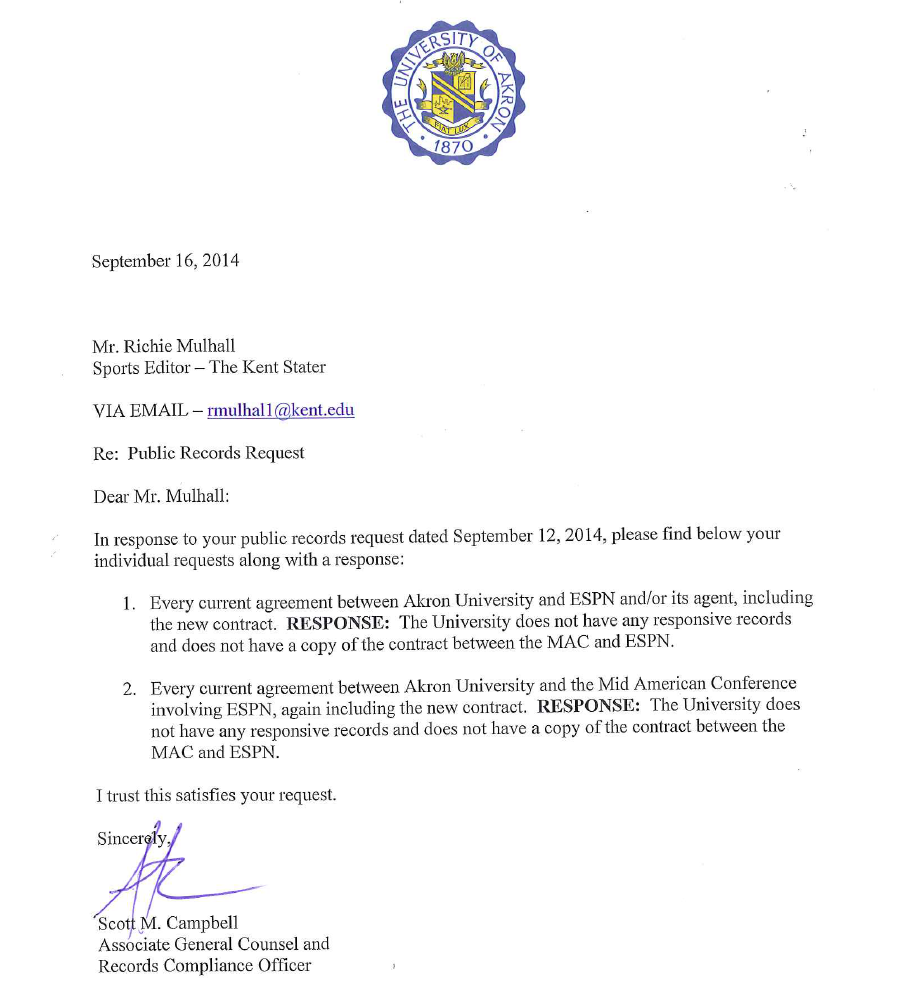 An UPDATE ON THE ESPN-MAC CONTRACT AND KENT STATE

In Ohio. the public records law dictates that records must be kept in a manner they can be made "readily available."   That generally means they have to be available the same business day, particularly for current records.   This is a current contract.   Obviously, the Athletic Director (or the AD's business manager) would certainly know where a contract this important is.   It will be on a computer.   To click on the document, hit attach, add the email address and hit send takes less than 60 seconds. 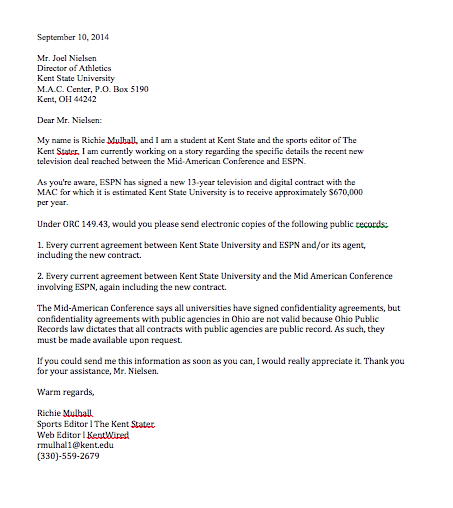 As Richie's public records request correctly points out, the fact that a university signed a confidentiality clause is irrelevant.   A confidentiality clause can not trump state law; and in Ohio, contracts with public universities are public record.  Is this contract a good deal or a bad deal?   The only way for Ohio taxpayers to know is to review it.  The University of Akron says it doesn't have a copy.  Hopefully, Kent State does and will provide it to student journalist Richie Mulhall as required under Ohio law.

Sports reporters across the country reported on ESPN's new television and digital media contract with the Mid-American Conference (MAC).    As the Columbus Dispatch reports, it's a 13-year contract worth more than $100 million with each university getting 670-grand a year.

What are the details of that contract?   What do the universities have to do?

That's right, the terms of  a 13-year contract worth millions with public universities is secret.
The chief operating officer of the MAC, Bob Gennarelli says he cannot provide a copy of the contract because it is "proprietary" and says all universities have signed "confidentiality agreements."

What are the details?   What does the university have to do under the terms of the 13-year deal between ESPN and the MAC?  Keep in mind, most university athletic departments lose millions of dollars every year.  Is the new ESPN deal a good deal or a bad one for member universities?   The only way to answer that is to review the details of the contract. Hopefully, my student reporter will have those soon.   If not, he'll have an excellent story on sports budget secrecy at public universities.

With the start of another college football season, here are some worthwhile legal reminders and story ideas for sports reporters who are reporters and not pom pom wavers.


What does your university president see as the risk of litigation from football concussions?
What were the freshman recruits told when they were recruited about a.) the risk of concussion and b.) who pays the medical bills if there's an injury and c.) what happens to the athlete's scholarship if he/she is injured?

Any college athlete can find lots of advice on a project my students produced a couple semesters ago on Athletic Medical Bills.