Julian Bond's presentation at Kent State was a reporter's dream.   He gave one great quote after another.

"Obama is to the Tea Party as the moon is to werewolves."

"Jim Crow may be dead but racism is alive and well."

"People who say race is history have it backward; history is race."

"Those were the days when politicians from both parties supported the struggle for civil rights, now they struggle to be civil."

Think about that.   And in the time it took for the audience to consider that statement he said it again.

He paused for just a moment and said again, "Republicans don't want black people to vote."

In the Akron Beacon Journal, the Record Courier and on Kent State University's student news website KentWired.com, there is no mention of the most newsworthy statement made by a man who has spent his life fighting for civil rights.   Republicans are now in power in Congress, and Julian Bond the former head of the NAACP does not hedge his words.   He speaks directly.  He speaks forcefully.   He states over and over again:  Republicans don't want black people to vote."

They need to hold their elected officials accountable.

Anyone at Mr. Bond's presentation heard him loud and clear:   Republicans don't want black people to vote.   Anyone who read the coverage of that event in the Beacon Journal or the Record Courier or Kent Wired didn't get that quote.   Readers didn't get a chance to read the one statement and the only statement Julian Bond made over and over and over again.

The Church of Self Censorship

The response to an attack on free speech should never be self censorship.

Sarcasm and satire are not crimes.

Opinion is not a crime.

Making fun of religion (easy to do - seer stones, burning bushes, living in a whale, virgins in heaven) is not a crime.

Killing innocent people, that's a crime.  A drone attack that blows up innocent people at a wedding party most likely generates more terrorists than it kills.   One can debate whether it's a crime.   One thing that's certain, the cartoon that addresses U.S. drone policy is not. 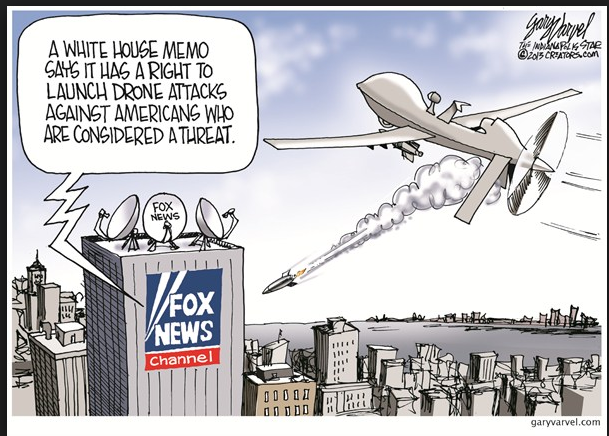 When innocent people are killed for what they say be it with word or drawing, the response from a news organization should never be self censorship.

No society is free as long as governments can imprison people for what they say and as long as journalists are freely willing to attend the church of self censorship. That's not a church to satirize or make jokes about; it's a church that needs to close.

Posted by Karl Idsvoog at 10:58 AM No comments:

Why?   To have any hope of addressing the threat of terrorism, it's the essential question to ask.
Who were those who attacked on 911?    The key question after 911 was WHY.  It's  a question the bulk of the American press failed to ask and analyze.

Considering those who attacked us, ask a simple question:  how aggressively did the American press question the U.S. Government about our relations with Saudi Arabia?  And why were all those "terrorists" from Saudi Arabia wanting and willing to die in an attack on the United States of America?  Here's the listing from CNN.

So WHY, did we attack Iraq?

Oh yes, Saudi Arabia is an ally.   How does it treat those who blog about religion in a way opposed by the government?   As the Guardian reports, Saudi Arabia sentences such people to prison and gives them 50 lashes for "insulting Islam."
How aggressively is the Washington press corps questioning the Administration and all our political leadership about our relationship with Saudi Arabia?   Why does the United States  continue to support (oil)  a country that doesn't tolerate free speech or rights for women?
For the press to examine terrorism, it needs to ask questions that need to be asked, not play human microphone stand for the government (or corporate) line.

Posted by Karl Idsvoog at 3:29 PM No comments:

The key to good reporting is asking good questions.   That's why reporters, not human microphone stands, are the ones who do stories that matter instead of blather that doesn't.

Here are three questions local television reporters should be asking their members of Congress.

1.  Do you believe in science?

2.  If yes, what specific legislative/regulatory steps should be taken to deal with climate change?

As the most recent Intergovernmental Panel on Climate Change reports:  "A large fraction of species faces increased extinction risk due to climate change during and beyond the 21st
century, especially as climate change interacts with other stressors (high confidence). Most plant species cannot naturally shift their geographical ranges sufficiently fast to keep up with current and high projected rates of climate change in most landscapes; most small mammals and freshwater molluscs will not be able to keep up at the rates projected under RCP4.5 and above in flat landscapes in this century (high confidence)."

3.  What are the implications for life in the United States 100 years from now if Congress fails to take immediate steps to reduce the emission of greenhouse gases?

Why aren't local television reporters questioning their members of Congress about climate change?

It's one thing for the press to fail to ask questions of our politicians about little things such as going to war with Iraq.   That just led to the killing thousands and spending a trillion or so dollars on a needless war instead of on education, roads, bridges and scientific research. There was no imminent threat.   Saddam had no nuclear capability, and the experts were well aware of that.     But climate change is hardly so insignificant as a trillion dollar needless war where the CIA decides torture's ok because the Bush Justice Department says it is.

In climate change, we have an issue affecting the future of the entire planet.   Isn't it time for reporters to ask their members of Congress what needs to be done?    And for those members of Congress who don't believe in science, shouldn't they be asked to explain why they choose to ignore the findings delivered by the greatest scientific minds in the world?

Why hasn't someone explained to CNN management that "Breaking News" is not a graphic?

Why would anyone interested in news watch a cable channel that thinks there's only one story a day?

Why not eliminate CNN domestic, the one-story-a-day channel?

Why not just run CNN International, a cable news channel that lets people interested in news find out what's happening around the world?

Why does CNN have a programming strategy to drive news viewers away?

Why doesn't someone at CNN domestic come up with the idea to report the news?   CNN International does it.    And CNN doing news would fill a void left by ABC Disneynews where viewers are able to find the hottest YouTube clips but not much about what's happening in the world.

Thank goodness for BBC and Al Jazeera.  Don't you wish someone in America would start a news channel?