NBC Won't Name Names in its Investigation of Medical Greed

It is a story of corporate greed.  NBC’s Lisa Myers reports how medical supply companies are inflating prices on desperately needed drugs to treat childhood leukemia, breast, ovarian and colon cancer.
She interviews Congressman Elijah Cummings who talks about the Congressional investigation of the companies.   Cummings describes the corporate behavior as  “profiteering big time.”
The investigation found a Miami-based company charging $990 for medicine that normally sells for twelve dollars.   The name of the company?   NBC doesn't report it.   Myers also reports on “another company” showing similar greed.
What’s the name of that company?   Who is the CEO?   What is that person’s name?   Why isn’t his picture on TV for this investigative report?    NBC doesn’t explain that.
In her standup, Lisa Myers says, “We reached out to the companies accused of profiteering.   They deny the allegations, say they are cooperating with the investigation.  And, that they’re actually helping by getting drugs to patients who need them.”
But NBC viewers don’t know the names of the companies NBC reached out to because NBC doesn’t name them, nor does NBC explain in its report why it doesn’t name them.
Congressman Cummings says the companies not named in the NBC report represent the “epitome of greed.”   They certainly should be held accountable, and the public deserves to know who the companies are.   Don’t hold your breath waiting for NBC news to push this story.   NBC doesn’t even dare name the companies that are a subject of a Congressional investigation.
When journalism fails, bad things happen.
###
Posted by Karl Idsvoog at 1:11 PM No comments:

The University Chancellor Who Won’t Talk

The Plain Dealer’s Rich Exner did an excellent piece on how fees charged to academic students fund the athletic programs of Ohio's Universities (except Ohio State, one of the handful of universities in the country that makes money).   But he buried something that should have been highlighted.
In paragraph 29, Exner reports:  “Requests to interview (University Chancellor Jim) Petro were declined.”
This is a public official.   This is the governor-appointed chancellor of Ohio's university system.  He has an obligation to explain why academic students, many of whom are taking out loans and working jobs to pay for school, have to pay more so the athletes can go to college for free.  And the press has an obligation to hold the public officials accountable.
News organizations shouldn’t bury such information; they need to highlight it.
We’ve moved to the era of “no comment”  or comment by press release.  And public officials can get away with it because the press allows it.
By the way, one reason parents and students in Ohio don't realize how much they pay each semester to the athletic department is because many universities don't provide line-item detail on the bill.   You can see that breakdown on a project my computer-assisted reporting class did.  "Examining the University Bill" provides the breakdown for universities in the Mid American Conference.   At Kent State University, students pay $24 dollars per credit hour (capped at 11 credits) to the athletic department.  That's true for all students, even distance-learning students who never set foot on campus.  So a distance-learning student taking a 3-credit course in our new online public relations masters program gets to pay $72 dollars (3 X $24/credit hour) to the athletic department.
If you think the governor-appointed chancellor of the university system should explain why he thinks that is appropriate, write and ask him.  His address is
Jim Petro (Chancellor who won't do an interview with the Plain Dealer)
Ohio Board of Regents
30 East Broad Street, 36th floor
Columbus, OH 43215-3414
General: 614-466-6000
When journalism fails, bad things happen.
###
Posted by Karl Idsvoog at 9:57 AM 3 comments:

In the Land of the Second Amendment

I haven't seen many reporters or columnists exploring the question.   And you certainly don't see many hard hitting interviews with members of board of directors or CEO's on the problem of wildly inflated executive compensation.   Remember when the first concern of a college president was education and not his/her pay package?  Remember when management and labor used to work together so when the business did well all prospered?  Do you think any members of the super rich ever think of what might be coming in the land of the Second Amendment?

We've watched what has happened elsewhere, but this isn't Greece.  This isn't London or Paris.   This is the land of the Second Amendment.
### 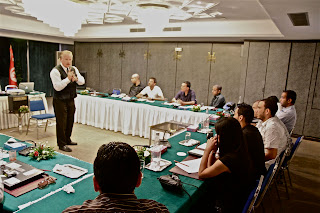