Where have you gone Rocky Marciano?


In 1955, possibly the most celebrated athlete was Rocky Marciano, the heavyweight champion.   I asked my students yesterday, "who is the current heavyweight champion?"   Not one student knew.   We no longer celebrate a sport where the goal is to render the opponent unconscious.      How long do you suppose we will celebrate the current most popular sport, one where its retired members have a tendency to commit suicide induced by the brain damage caused by the sport?

Retired NFL players are telling their own children not to play.  When do you think a college president may figure out a sport designed for violent collisions is not consistent with a university's mission of education?  When do you think sports reporters will start asking college presidents if a sport that causes brain damage is consistent with a university's mission?  Most likely, that won't happen until the lawsuits start coming and depositions are taken.

During Rocky Marciano's era, we had the tobacco industry.  What they sold to the public was a lie, one horribly detrimental to public health.  And as the lawsuits came, it was apparent the industry knew of the dangers and failed to disclose them.   Today, we have a similar threat to public health targeted to our sons.   And if you read the complaint filed by the NFL players against the league, you'll see amazingly striking similarities in the league's behavior and that of the tobacco companies.

Later today, my computer-assisted reporting class hopefully launches a project it has produced on concussions.   Despite all the publicity about concussions, my students found school superintendents who don't even know if their school has a concussion policy.    My student reporters found several Ohio high schools that do not track concussions.   They also found a school district (Chillicothe) that is doing a first-rate job.  It has a detailed policy, one that requires immediate notification of the parent if there is ever a suspected concussion.  My students also discovered a school district where the football players must run around covered with pillows saying "careful, careful, careful" as they run their plays, because this is a school district that says it has not had an athletic concussion in 9 years.

What's happening at your school?   Does it track all concussions in games and practice?   Does it require concussion education for all coaches?   Does it require immediate notification of the parent for any suspected concussion injury?  That's an easy story for any reporter in any market to do.    But to do that story, you have to put down your pom poms and pick up your pen.

The students in my computer-assisted reporting class are about to launch a project on concussions.  We called high schools around the state to ask a couple basic questions:   does your school track all concussions in games and practice?  Does your school require mandatory concussion education for all coaches?

When I asked the superintendent of one of the powerhouse high school football programs in Ohio whether his school tracks all concussions in games and practice, he responded "no comment."

My student journalists found Ohio high schools that have no concussion policies. They found superintendents who don't even know if the school has a concussion policy.   They also found what must be a program where the student athletes wear helmets and run around with pillows and say "careful, careful, careful" as they run their plays.   My students found a high school that says it has not suffered an athletic concussion in 9 years.  As a colleague of mine who is familiar with the school system said, "they have more concussions than that in the hallway."

So here are some questions that journalists - not cheereleaders - should be asking.   Why don't they?  The answer is simple:  because it's football.

Why would university presidents support an activity that causes brain damage?

Why would parents support an activity that causes brain damage?   (Full disclosure:  I certainly would have allowed my son to play.   Now?   Never.   We are today with football where we were in the 1950's when you could page through a magazine and find an advertisement where a doctor told you the best cigarette to smoke.)

How could any high school not require mandatory concussion education training for all coaches?

How could any high school not require immediate parent notification of any suspected concussion?

Why aren't school superintendents asking legal counsel how the increased knowledge we now have about concussions has affected the litigation potential for the school district?

Why aren't university j-school directors pushing student journalists to ask the above questions?

If your school district is in need of a knowledgeable attorney, check with the attorney who wrote the Athletic Concussion Protection Act of 2011 for the District of Columbia, Joseph Cammarata.  I just did a videoskype interview with him for our student reporting project.   When it comes to concussions, he is a wealth of information.

And if your son is heading out to play what's become the number one sport in America ask yourself one question:  would you tell your son, "be sure to text while you drive."   Would you want him to take that risk?   What risk do you want your son to take with his brain?

As the CDC points out, concussions are serious brain injuries.   In most concussions, the athlete never loses consciousness.   We will continue to play sports.   The problem usually doesn't come from the initial concussion; it comes from the player being put back into play, taking another hit to a brain that's already been rattled.   That's what happened to the high school athlete that prompted the law to protect high school athletes in the state of Washington.   Ohio has no such law.   Why?   Why do you think?   Because it's football.

On Veterans Day, NBC, CBS, ABC, the Washington Post and the New York Times owe our nation and its veterans an apology.   Had the press done its job, there would not have been a war in Iraq.  But rather than ask the questions that needed to be asked, the press played cheerleader.

When Journalism fails, bad things happens.   In this case brave men and women died who shouldn't have.  Thousands more have been scarred.  Thousands of American families have suffered loss and pain they never would have had to endure had the press done its job.

PS:  FOX isn't included because Fox is brilliant.   It's the most magnificently designed profit generating propaganda organization in the history of communication.  I remember being in the Republic of Georgia during the run up to war watching my satellite channel and seeing a FOX News sponsored war rally.  It was great teaching material for students at the Caucasus School of Journalism & Media Management in Tbilisi as we discussed what is and isn't journalism.   The performance of the press we witnessed during the run up to war was not journalism.   On the propaganda front, FOX was and continues to be the clear winner.
Posted by Karl Idsvoog at 10:47 AM 1 comment:

So let me give this blog another title:  required reading for anyone in a journalism school or working in any organization that pretends to do news.

Read Dan Gillmor's column in the Guardian.   Then go ask your editor or news director one question:   should we start doing journalism or just keep doing the crap we're doing? 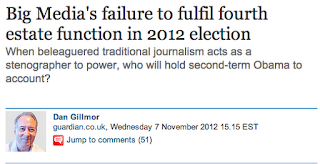 The devastation caused by Sandy should have surprised nobody who believes in science.  As the headline in the New York Times said,  "For Years, Warnings That It Could Happen Here."

What serious questioning did Romney and Obama get about global warming?   Romney joked about it at his convention.

Global warming is not a joke and there's certainly nothing funny or humorous about the failure of the press to ask serious questions about a serious issue.  Twenty-five years ago, most likely you would have seen hour-long documentaries on the networks addressing such an issue.   Now, the networks care about the exact same thing as BP, stock price and executive compensation.

How does such a serious issue go totally unquestioned by trained journalists at the presidential debates?   What's happening in your market?   Are your local reporters questioning each and every member of the Congressional delegation on the issue?   If not, write to the general manager of your local TV stations.   Write to the editor of your local newspaper.   Ask them why their reporters are failing to ask questions that need to be asked.   And for your newspapers, try to find the most in-depth videoskype interview its done with a climate scientist or politician on the issue.   If there is no such interview, ask your editor to explain why the newspaper doesn't bother to utilize today's technology to report.

Posted by Karl Idsvoog at 8:50 AM No comments: