It is brain-smash (football) season again. When do you think universities will recognize what medical science has discovered and do something about brain-smash season? When do you think a president of a university will object to a sport that causes brain damage?
When I was a kid, you could page through a magazine and find an ad featuring a doctor telling you what cigarette to smoke. 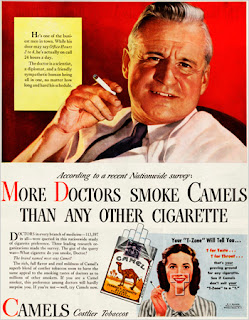 What fabulous health advice. Apparently, if the ad is true, a whole lot of doctors liked Camels. Don't you wonder how many of them got lung cancer? But doctors' behavior changed.
With smoking, oh oh, along came medical science. Ah yes. Facts. Substantive scientific research. Turns out the ads urging people to smoke weren't good for your health, just for the tobacco companies' bottom line. (Now tobacco companies target poor people in Africa) Journalists reported what the scientists had found. This was IMPORTANT public health news. The public was informed. Behavior changed.
With football concussions, medical science came along again. But this time, reporters for the most part didn't report. They just waved their pom poms and played college cheerleader. It took a movie starring Will Smith to inform the public.
What do university presidents say when questioned by reporters about football concussions? Here's a video clip that answers that question.
Reporters aren't questioning their university presidents about why the university continues to support a sport that causes brain damage. How come? Is it possibly because Brain Smash is still America's favorite game and a big revenue producer for television? At most universities, Brain Smash loses millions each year. This clip is three years old, but profit/loss numbers still show most schools losing.
What will it take for a university president or the head of a university medical school or a provost or a dean to speak up? More brain damage? More lawsuits?
One thing is certain: mothers will take care of it. Moms who put helmets on their toddlers before they let the kids ride their trikes aren't about to let them play football. They know what Vince Lombardi knew. He didn't call football a contact sport, he described it as a "collision" sport.
Mothers are concerned about their child's brain. University presidents aren't. If you meet a university president, ask why. You'll have to ask why. The press isn't.
When journalism fails, bad things happen.