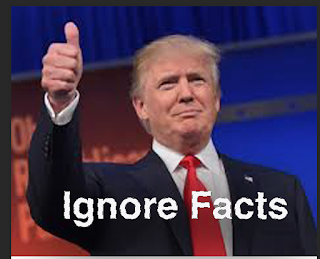 Have your class read this piece from the Cleveland Plain Dealer that contains facts about trade and immigration between the United States and Mexico.

Then ask your students to check their local newspaper and/or television websites for articles on Trump, Mexico, trade and immigration.   Did your local reporters check and report facts?

If not, call and request an interview with the managing editor/executive producer and ask why.   A primary responsibility of the journalist is to provide context.   To do that, fact-checking is essential.   How many articles do you remember about Trump and his WALL where reporters put that idea into context with the real numbers about immigration?
This Plain Dealer article comes not from a reporter but from Peter Schecter who directs the Adrienne Arsht Latin America Center of the Atlantic Council.   With Trump wanting to build a wall and continually complaining about all those flooding across the border, Schecter writes:  "In the real world, more Mexicans are leaving rather than entering the United States, a well-documented, though curiously disregarded statistic. Those Mexicans who do come northward are ever more frequently doing so as tourists; in 2014, 17 million Mexican tourists spent nearly $19 billion on goods and services in the United States."

Why haven't reporters been reporting that fact in every article where Trump rails against all those pesky folks coming across the Mexican border?

What does trade look like JUST for OHIO?  Schecter reports:  "Ohio exported $6.5 billion of goods to Mexico in 2015, an 8 percent increase from 2014. Mexico is Ohio's second largest foreign trading partner, the destination for more than $1 billion of Ohio-made machinery, the state's leading foreign export."

Why have so many reporters forgotten how to check facts essential for placing a politician's comments into proper context?