In its article Behind the Charm Offensive (the online headline is Behind Iran's Charm Offensive), Time seems to forget the offensive facts of American foreign policy and Iran.   In the magazine, there's a helpful center column bit of artwork with pictures of U.S. and Iranian leaders with dates and reminders of what has happened over the years.  Time begins what it calls the "history of hostility - and chances missed" in 1979. 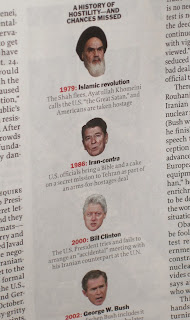 What is omitted in Time's history of hostility is its beginning.   During the Eisenhower administration, Iran's Prime Minister Mohammad Massadegh wanted to nationalize the oil fields and share the wealth with the Iranian people.   The United States did not want that.  The CIA orchestrated a coup, overthrew Massadegh and installed a U.S. puppet dictator, the Shah.   The Shah's secret police force, Savak captured, imprisoned, tortured and killed any political enemies.   Approval of torture by this country didn't start with Bush and Cheney.   Our foreign policy approved of torture decades earlier in Iran.   And anyone with any knowledge of American foreign policy will tell you the Iranian uprising and revolution of 1979 came as a direct result of American foreign policy.

So why is such a crucial bit of information omitted from the Time article?   Every family in Iran knows America was responsible for overthrowing its leadership in 1953.  Every family knows the ruthless brutality of the Shah's rule.   Even the CIA now admits it orchestrated the coup.    What does Michael Crowley report of the Eisenhower years?   He writes about the "Atoms for Peace Project," that supplied the Shah with nuclear technology.   Yes, the U.S. overthrows the government, installs a ruthless dictator, then gives the ruthless dictator nuclear technology.   Time and Michael Crowley totally ignore the CIA coup.  Crowley totally ignores Savak and the brutality of the Shah.

It is impossible to put U.S. - Iranian relations in proper context when omitting the key historical event. Given Iran's history with the U.S., it's understandable that Supreme Leader Khamenei is hostile to the West.   How would you feel about a country that overthrew the leadership in your country and installed a ruthless dictator?

Perhaps its all the budget cuts at Time that have eliminated editors who believe in putting American foreign policy into proper historical context.    Let's hope it's just poor reporting, not intentional bias. Either way, the reader loses.